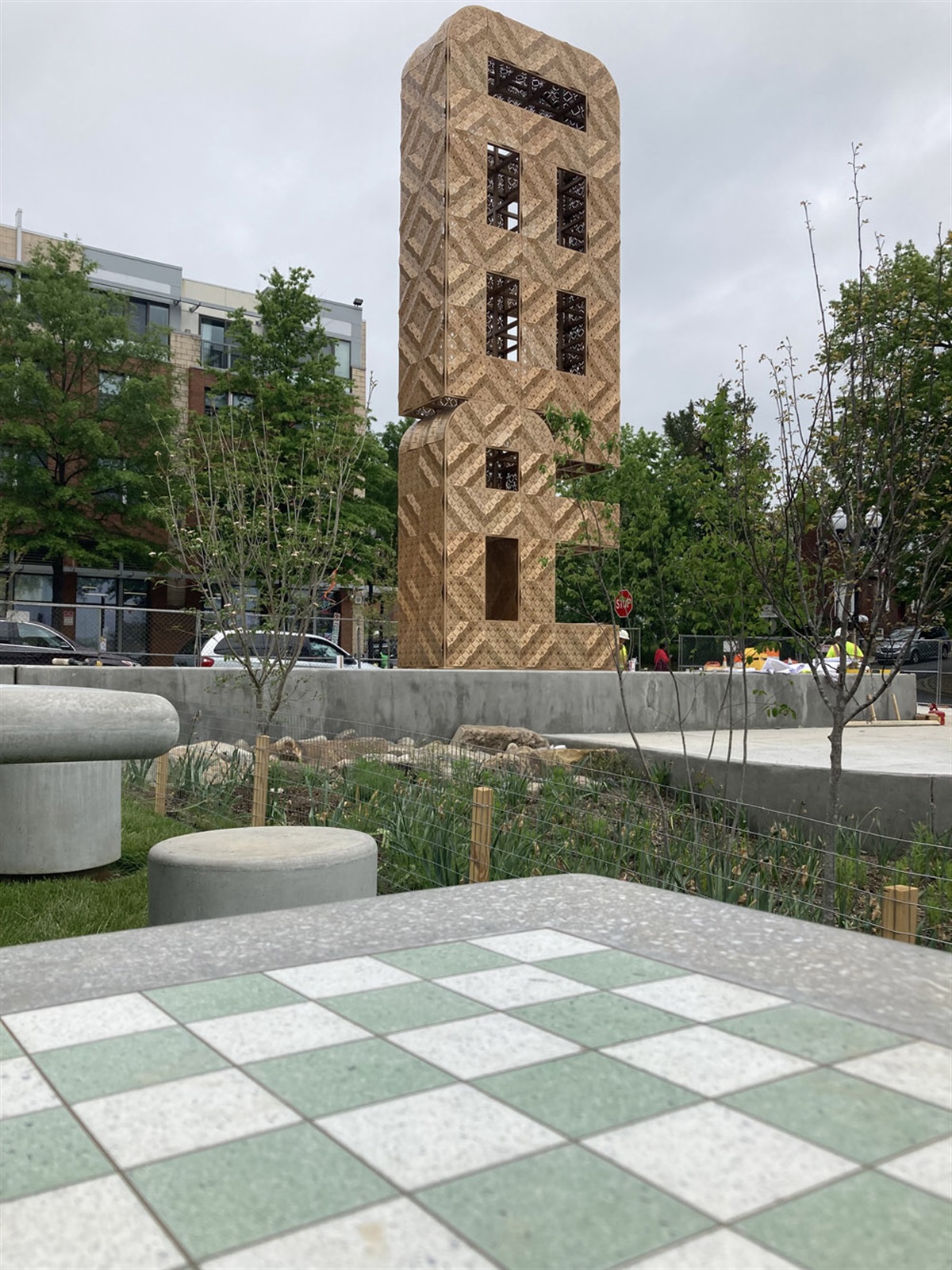 Arlington County Council officially named Green Valley Town Square as John Robinson, Jr. Town Square as part of a grand opening celebration on Saturday, May 7, 2022, during a event which included a ribbon cutting, remarks from the county council, stories from the community and more.

“The John Robinson, Jr. Town Square realizes a vision for Green Valley that emerged from a community-led planning process and provides civic space that will accommodate a variety of uses and users through thoughtful design and inspiration from Walter Hood,” County Vice-President Christian Dorsey said. “Through the iconic RELEASED sculpture, we are encouraged to contemplate historical and contemporary struggles for freedom and equity while drawing inspiration from the square’s namesake, John Robinson Jr., whose life was dedicated to uplifting our black community.

John Robinson, Jr. Town Square was developed as the anchor of the Village Center, in conjunction with the Four Mile Run Valley initiative. Its features and enhancements include an open space and plaza, public art, an outdoor stage, neighborhood history and community information, sidewalks and pedestrian enhancements, and seating and tables.

The space was designed by an award-winning landscape architect and artist Walter Hood. Hood’s design was inspired by the history and community of Green Valley.

“I want to personally thank the people of Green Valley for their kindness and support throughout the project,” said Walter Hood. “I have come to admire your tenacity and commitment to telling your own story and supporting local stories and the future of the community, starting with the name of the space, John Robinson, Jr. Town Square.”

Hood was particularly influenced by the neighborhood’s historic ties to Freedman’s Village, a community of runaway slaves and free people established at the end of the Civil War on property that later became home to the Pentagon and the cemetery of ‘Arlington.

About the town square

John Robinson, Jr. Town Square is comprised of a set of diagonal walkways laid over a grid of streets creating a venue that allows for a variety of community programs including markets, festivals and daily recreation, a desired key feature identified at meetings with the Green Valley Civic Association.

A shallow swale, or drainage path, includes a lush planting palette of native plants that treat site runoff. Along the banks of the rill, small flowering trees and benches are interspersed, allowing quiet places to sit.

The change in level of the site delimits a lawn with stepping stones on one side and a widened sidewalk with planters of bioretention trees on the other. A plaza with a stage overlooks a grove of river birches.

About the FREED sculpture

The main design feature of the Town Square is the RELEASED sculpture, a 9 meter high lighthouse that pays homage to the notion of freedom. Each letter in the gold carving incorporates laser-cut designs with the name of a historic Green Valley subdivision and a Ghanaian Adinkra symbol. Learn more about the Hood Studios website.

AFTER: Watch a timelapse of the installation of FREED

The project is supported in part by a prize from the National Foundation for the Arts.

Arlington-born John Robinson, Jr. (1934-2010) was a community activist who fought for decades against racial injustice and inequality in Northern Virginia. Robinson released the Green Valley News, a free African-American publication that has circulated in Green Valley for more than 45 years. Robinson also founded and ran the Dr. Martin Luther King Jr. Community Center in the neighborhood and organized food, clothing, and furniture drives for local families. Over the years it has opened its doors to hundreds of homeless people.

Robinson was widely recognized for his community activism and was often referred to as the “Mayor of Green Valley”. In November 2020, the County Board approved the naming of the town square in Green Valley as John Robinson, Jr. Town Square.

Fresh off the press: Everton – News