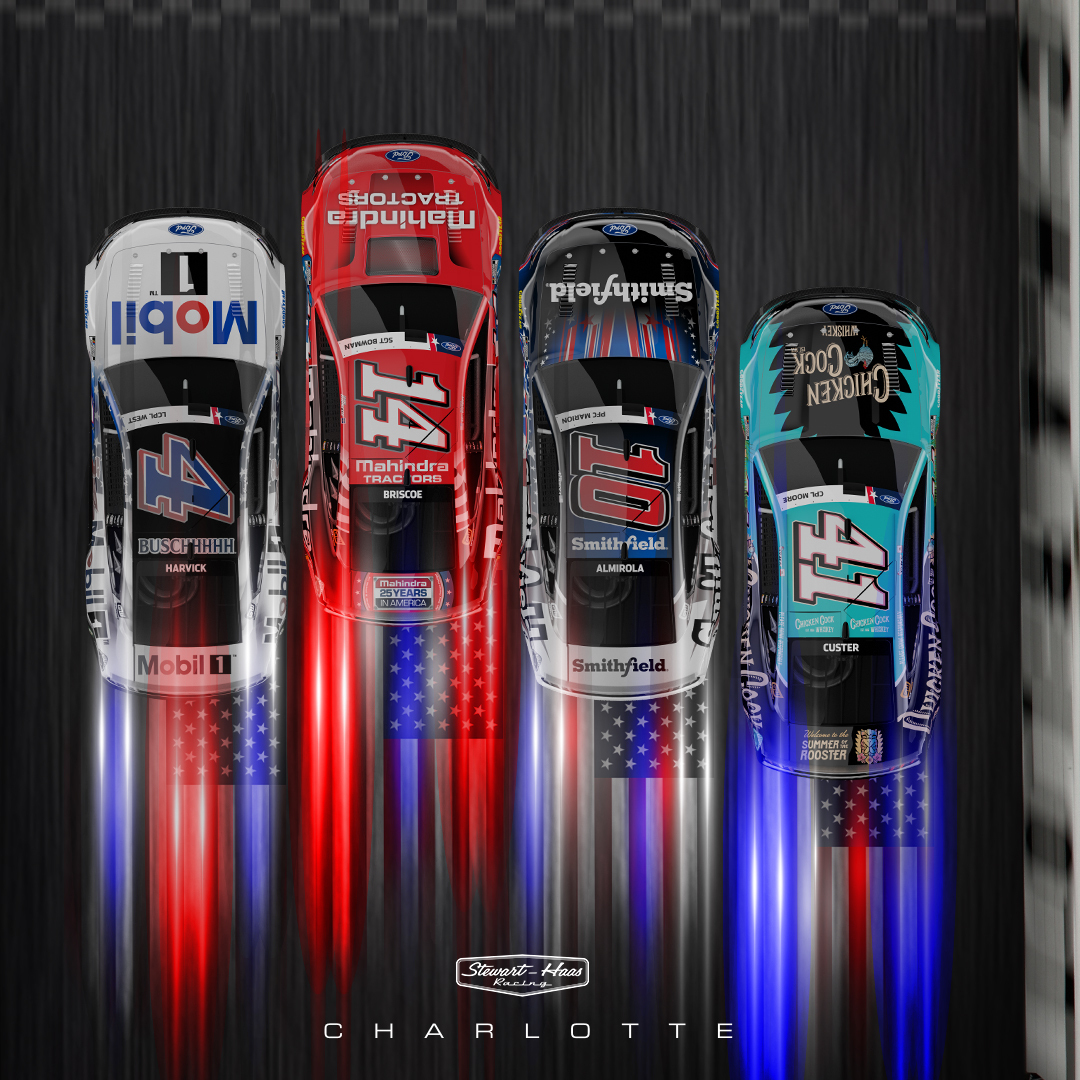 This Memorial Day weekend, we’re running for something more. As part of #NASCARSalutes and the 600 Miles of Remembrance initiative during the Coca-Cola 600, each of our teams will honor a fallen soldier who made the ultimate sacrifice for our country. Below is everything you need to know about one of the most grueling races on the NASCAR circuit.

Kevin Harvick:
As part of #NASCARSalutes and the 600 Miles of Remembrance initiative during the Coca-Cola 600, the #4 Mobil 1 team pays tribute to Corporal Phillip G. West of the United States Marine Corps. West was based at Camp Pendleton in Oceanside, Calif., where he served with the 3rd Battalion, 1st Marines, 1st Marine Division, I Marine Expeditionary Force. The American Canyon, Calif., native served in Operation Iraqi Freedom, and he was the first Napa County resident to die during the Iraq War, succumbing to wounds Nov. 19, 2004, in Fallujah. West was deeply committed to his military service, often telling his family and friends, “If we don’t do it, who’s going to?” West joined the Marine Corps Deferred Entry Program in August 2002 and after graduating from high school, he embarked on a boot camp in San Diego. He graduated from boot camp, then infantry school, and deployed to Iraq in June 2004. Once in Iraq, West rose to the rank of Lance Corporal.

This year’s Coca-Cola 600 will mark Harvick’s 40th NASCAR Cup Series start in Charlotte. The Bakersfield, Calif., native has nine top fives and 20 top 10s in a career dating back to the 2001 Coca-Cola 600, which was Harvick’s first money-making race in Charlotte. In the 4 hour and 20 minute affair, Harvick finished second behind Jeff Burton and ahead of third place Tony Stewart, the owner of the Stewart-Haas Racing #4 Mobil 1 team car.

Aric Almirola:
Memorial Day weekend’s Coca-Cola 600 at Charlotte (NC) Motor Speedway is one of sport’s most patriotic events, honoring fallen soldiers who have made the ultimate sacrifice for their country. This weekend, Stewart-Haas Racing (SHR), Smithfield Foods and Aric Almirola will honor Pfc. Adam Lee Marion of the North Carolina National Guard, who was killed in an attack on his Forward Operating Base in Baghdad, Iraq in 2008 during Operation Iraqi Freedom. The connection comes from spotter Joel Edmonds, who knew Marion at a young age and is a friend of Marion’s father.

Almirola and the Smithfield Ford team showed speed at 1.5-mile sites earlier this year at Las Vegas Motor Speedway, where he crossed the finish line sixth two weeks ago at Kansas Speedway, where he qualified seventh and raced in the top 10 until a mechanical issue caused him to lose two laps, eventually finishing 26th, and last weekend at Texas Motor Speedway in Fort Worth where he qualified eighth for the NASCAR All-Star race and finished 12th.

Chase Briscoe:
Team #14 will honor the memory of U.S. Army Sgt. North Carolina native Larry Robert (Bobby) Bowman in NASCAR’s annual ‘600 Miles of Remembrance’ race. sergeant. Bowman, of Granite Falls, died April 13, 2007 when his vehicle struck a roadside improvised explosive device while on a mission in Baghdad. He was on his second tour of Iraq with the 513th Transportation Company, 57th Transportation Battalion, 593rd Corps Support Group as a heavy vehicle driver delivering food, water, fuel and other mission critical supplies. He was to return home three months later.

In four NASCAR Xfinity Series starts at the Charlotte Oval, Briscoe finished sixth last May after starting second. Still looking for his first win on the oval layout, he visited Charlotte’s victory lane after picking up his first career Xfinity Series victory at the Roval in October 2018.

Cole Custer:
As part of NASCAR’s annual “600 Miles of Remembrance” over the traditional Memorial Day weekend event, U.S. Army Cpl. Joshua McKay Moore will be displayed on the windshield of Custer’s #41 Ford Mustang. Moore was born November 30, 1986 and died May 30, 2007 in Baghdad, Iraq. He was with the Army, Company C, 1-18 Infantry, 1st Platoon, 2nd Battalion, 1st ID, FOB Falcon. Moore was made a posthumous corporal for his efforts during the war. He and three other people were killed when the Hummer they were in crushed an improvised explosive device during its second deployment to the area. He was 20 years old. Friends, family and relatives say Moore was someone “everyone loved and, if you were around Josh and didn’t know him, it wouldn’t take long for you to know him. He was the life of the party and someone who made everyone around him better and happier.

In his five career NASCAR Xfinity Series appearances at the Charlotte Oval, Custer has four top-10 finishes with a best of runners-up in the May 2018 race, when he was runner-up to the winner. Brad Keselowski in a race that ended on bail.

Check out the paint schemes we’ll be racing in as we tackle 6oo miles this weekend.

What our drivers say:

What does it mean to honor and remember a service member on your #4 Ford Mobil 1 this Memorial Day weekend?
“There is no sport that honors the military more than NASCAR. I know a lot of sports do a lot for our military, but when you come out this particular weekend with the Coke 600 and be part of the celebration and the remembrance of all that’s happened with our military, to see the support that NASCAR and everyone in our garage is giving to the military, especially this particular weekend, is something that gives you goosebumps.

What do you think of your paint scheme for this weekend?
“Man, this has got to be my favorite as far as looks go. Those red, white and blue stripes are just gorgeous. We’ve done this similar scheme before, but it looks even better with the placement of the numbers. I’m happy that Smithfield has maintained this one for us and the fans.

Teams tested the NextGen car in Charlotte during the offseason. Is it useful to already have laps on the track?
“It’s definitely the track where I feel like most people get the most laps when it comes to this car. But, every time we were testing in Charlotte, we were running different packages. I don’t I’ve ever run the current package in Charlotte. This track is unique and sensitive. There are tire drops. It’s really heat sensitive and it’s one of the roughest racetracks we’ve ever been to. But yeah , I don’t know, I don’t know what to expect for the 600.”

Do you do anything different to prepare for a race as long as the Coca-Cola 600?
“The 600 is definitely the longest race I’ve ever run. I think the most important thing is to stay hydrated and make sure you’re loose before the race and not in pain. Just try to relax, especially in the first part of the race. Halfway through, you just have to try to settle in and do a few laps. The problem is, you can’t really relax too much because you have to fight for stage points and fight for track position as much as you can. You have to stay hydrated. I guess there’s also a need for a snack somewhere in there, but it’s definitely the longest and most grueling race I’ve run.

With the Indy 500 and Coke 600 this weekend, rewatch Tony Stewart’s Double Duty performance in 2001. The boss is the only driver to complete both races on the same day.