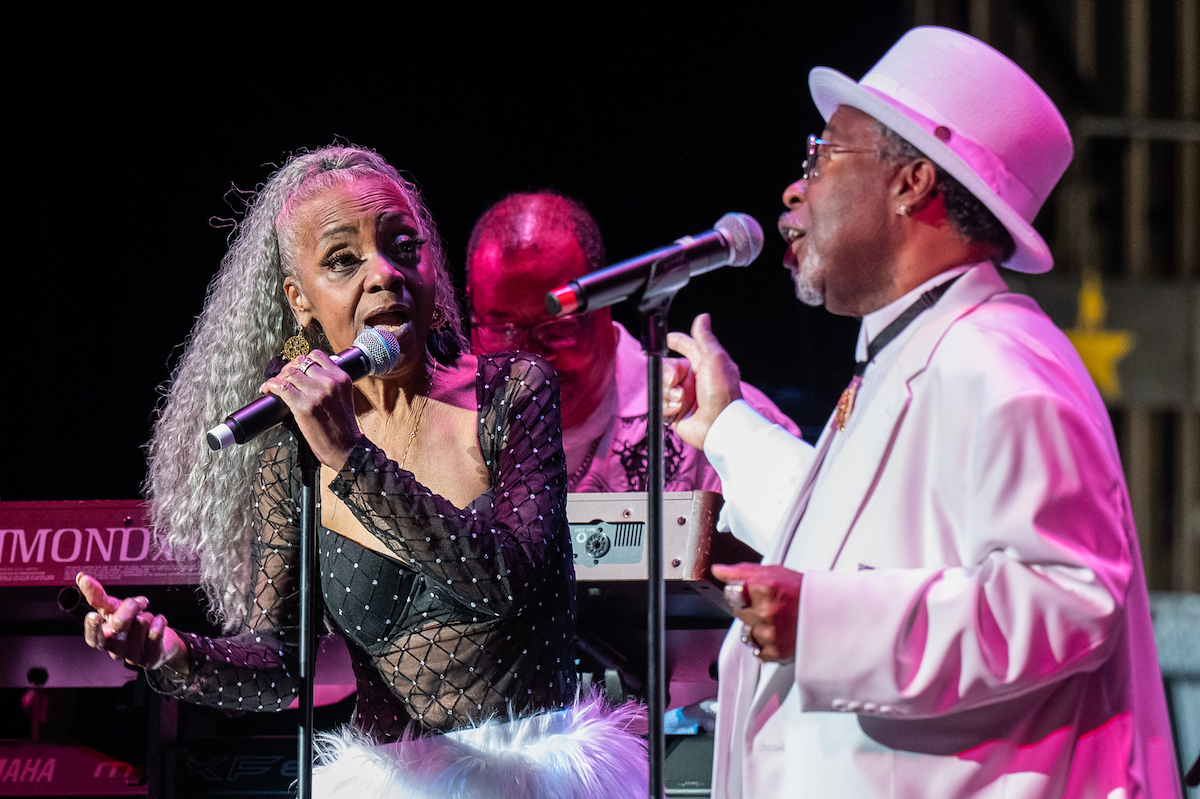 Promoter Geno Shelton won a grand slam on June 18 with the Juneteenth Freedom Funk Festival. Nearly full audiences showed up at the Old National Center for an all-star selection of funk legends including Lakeside, the Bar-Kays, Zapp, Trouble Funk and Klymaxx. (The medium white stripe was also scheduled to appear, but canceled due to COVID-19.)

In addition to the aforementioned musical luminaries, Shelton has also added two of Naptown’s most beloved funk bands to the lineup: Ebony Rhythm Funk Campaign and Circle City Band. These local funk legends will be the focus of this review.

Ebony Rhythm Funk Campaign were the first band to hit the stage. Ebony Rhythm holds an important place in Indianapolis music history. The group was founded in the late 1960s as the Ebony Rhythm Band, a largely instrumental quartet that developed a unique psychedelic funk sound that predated George Clinton’s famous Parliament-Funkadelic. Ebony Rhythm found rapid success in Naptown. Along with performing at local clubs like 20 Grand and Blue Eagle, Ebony Rhythm became the house band for the Indianapolis-based Lamp Records label. Ebony Rhythm played on the label’s biggest hit: The Vanguards’ “It’s Too Late For Love,” which cracked the Billboard R&B Top 40 chart in 1970.

Building on their success with Lamp, Ebony Rhythm hit the West Coast in the early 1970s, impressing music industry veterans like Wayne Henderson of The Crusaders, who produced their debut album in 1973. Around this time, the band had expanded into Ebony Rhythm Funk. Campaign, adding a full horn section and several singers. Ebony Rhythm produced two classic funk albums and a Billboard single, “How’s Your Wife (And My Child)” in 1975, before going their separate ways in the late 70s.

Ebony Rhythm’s appearance at the Juneteenth Freedom Funk Festival was their first performance in 15 years. Despite their long absence from the scene, Ebony Rhythm delivered an almost flawless set, which focused heavily on tracks from their 1976 album, “Watchin’ You, Watchin’ Me”. Ebony Rhythm has lost many key members over the years, but three of the band’s founders remain: bassist Lester Johnson, keyboardist Ricky Jackson and vocalist Pam Tanner-Davis.

Ebony Rhythm has assembled an impressive lineup of Indianapolis musicians to round out the band, including prominent local jazz players like Rob Dixon, Reggie Bishop and Freddie Mendoza, as well as veteran Naptown R&B artists including Guy Lipkins and James Blane. In short, Ebony Rhythm spared no effort to bring their legendary sound to the stage. This effort paid off, as Ebony Rhythm provided one of the most memorable sets of the night.

The second act to hit the stage was Circle City Band, best known for their classic 1983 single “Magic.” Although “Magic” never hit the Billboard charts, the song became an underground classic with soul music fans around the world, and for many years an instrumental version of the track was used as the theme music for the BET cable network.

Circle City Band originally started as a studio project created by bassist Paul Thomas, who had previously played with Rapture, a prominent Indianapolis funk band fronted by Rodney Stepp. While Thomas was developing the sound of Circle City, he recruited Reggie Griffin, co-founder of Naptown’s famous band Manchild (the band that launched Kenny “Babyface” Edmonds’ career). Griffin is known as “Mr. Everything,” a name born from his incredible ability to shred on a variety of instruments, including saxophone, guitar, and keys.

But it was Griffin’s knowledge of synths and drum machines that drew him into Circle City’s orbit. By the early ’80s, Griffin was garnering national attention for his work in electronic music, and for a brief period he was employed as a producer for Sugar Hill Records, where he helped create hip classics. -hop like “The Message” from Grandmaster Flash. .” Griffin’s electronic motifs paired perfectly with Thomas’ funky bass music, and together they created a series of classic ’80s electro-soul singles under the name Circle City.

Both Thomas and Griffin were in high spirits when they took the stage. Thomas made a striking presence on stage, donning a chunky fur coat that evoked the Superfly era of the 1970s. Griffin was spectacular on guitar, deftly demonstrating why artists like Aretha Franklin, Chaka Khan and the Isley Brothers appealed to his talents as a musician and producer. One of the highlights of the Circle City set was a special appearance by Manchild frontman Kevin “Flash” Ferrell, who retains the charisma that helped lift Manchild to national prominence in the 1970s.

As for the rest of the show? A blow-by-blow summary hardly seems necessary. Some of the greatest funk bands of all time played some of the greatest party music ever created. Good vibes and positive energy were flowing in abundance. The spectators danced happily in the alleys of the old national center.

When I spoke with Geno Shelton before the event, he told me he hoped the festival could provide an antidote to the blues and cabin fever that many people have experienced during the COVID shutdown. -19. I have no doubt that his objective has been achieved.