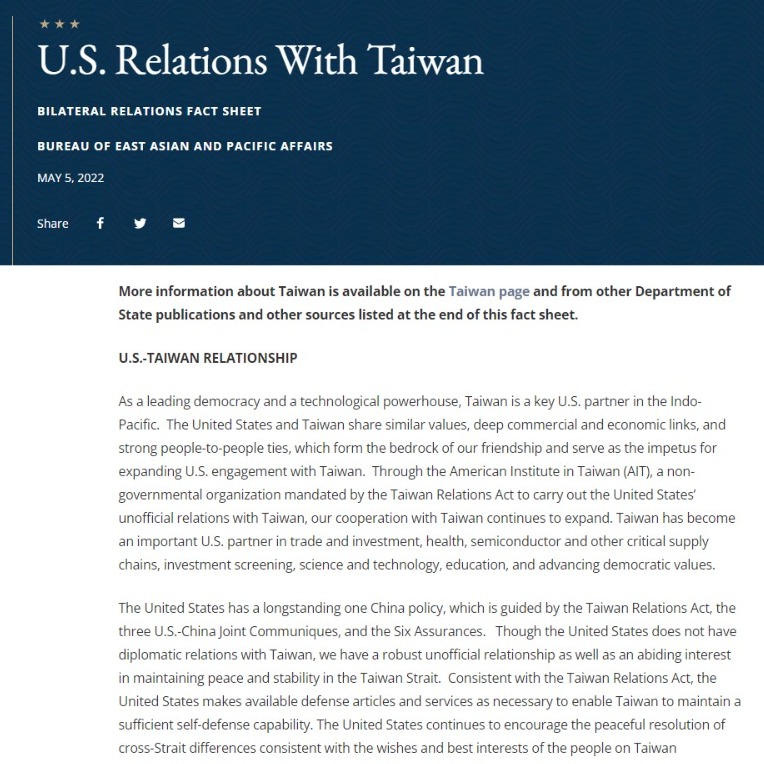 The Taiwan fact sheet published on the US State Department website removed statements that the US government recognizes China’s claims to Taiwan and does not support the island state’s independence , as reported by Chinese media.

The website was updated on May 5 by the State Department’s Bureau of East Asian and Pacific Affairs, with the previous version stating that “the United States and Taiwan have an unofficial relationship solid” and that the U.S. government has recognized “the Chinese position that there is but one China and Taiwan is part of China”, and the United States “does not support Taiwan independence”.

However, in the new version, the understanding of China’s policy towards Taiwan and the statement of no support for Taiwan independence have been removed. Instead, it now begins, “As a leading democracy and technological powerhouse, Taiwan is a key partner for the United States in the Indo-Pacific.”

The new version still acknowledges that cooperation between Taiwan and the United States is unofficial, saying that the United States “has long had a one-China policy guided by the law on relations with Taiwan, the three U.S.-China joint communiqués and the six insurances”.

Instead of not supporting Taiwanese independence, the fact sheet now says the United States encourages a peaceful resolution of disputes between Taipei and Beijing that is “consistent with the wishes and best interests of the people of Taiwan.” .

Asked to comment Tuesday on the updates and why they were made, Ed Dunn, spokesman for the American Institute of Taiwan (AIT), representing American interests in Taiwan, evaded questions.

He simply reiterated the US position on Taiwan saying that Washington’s “one China” policy has been guided by the Taiwan Relations Act, the Three Joint Communiques and the Six Assurances for more than four decades.

“Our commitment to Taiwan is rock-solid and helps maintain peace and stability in the Taiwan Strait and the region,” he said.

The United States, he said, is committed to deepening unofficial relations with Taiwan, which he described as a leading democracy and an essential economic and security partner of the United States.

Citing the AIT statement, Ministry of Foreign Affairs (MOFA) spokeswoman Joanne Ou said on Tuesday that the US government had announced that its policy toward Taiwan had not changed.

She said Taiwan will continue to deepen relations with the United States and strengthen its self-defense capabilities and freedom and democracy system to promote peace and security in the Strait.

Meanwhile, Yeh Yao-yuan, chair of international studies and modern languages ​​at the University of St. Thomas, Houston, wrote on his Facebook page that the updates to the fact sheet mean a “striking warming of relations” between the two countries, mainly due to growing tensions between the United States and China.

Even though the United States still maintains its one-China policy and strategic ambiguity toward Taiwan, Yeh said the United States now sees Taiwan more as a key economic, security and democratic partner and is more open to Taiwanese who make their own decision about their future.